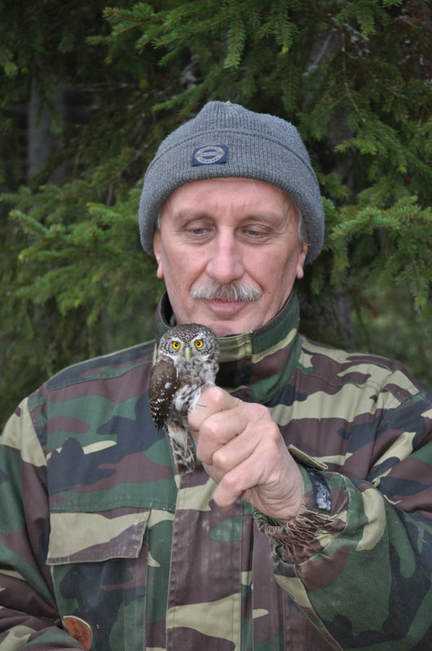 Champion of Owls Award: Dr. Erkki Korpimäki, Finland
For more than 50 years, Dr. Erkki Korpimäki has studied the Boreal Owl in the wild, western regions of Finland. The Boreal Owl, also known as the Tengmalm’s Owl, is a small owl that inhabits coniferous forests in North America and Eurasia, mainly preying on small rodents such as voles. Dr. Korpimäki’s research has focused on the characteristics, demographics, behavior and ecology of the Boreal Owl and the complexities of the owl-rodent, predator-prey relationship.

With his research team, Dr. Korpimäki has investigated population dynamics; diet composition; mating systems, success and costs; hatching patterns; survival and dispersal; owl community structure; and blood parasites of owls and other raptors living in the fragmented boreal forests and agricultural areas of Finland. He has intensively studied interactions of owls and other raptors with prey species, the effect of avian predation on prey species populations, and the cyclic nature of the predator-prey relationship. His research has also included food-hoarding behavior and population dynamics of Pygmy Owls, as well as population dynamics and diet composition of Long-eared Owls, Short-eared Owls, Ural Owls, Snowy Owls, Eurasian Eagle Owls, Kestrels, and other birds of prey.

Dr. Korpimäki is recognized as an international expert on the Boreal Owl, owl ecology, and avian predator-prey relationships. He has published more than 280 articles in international scientific journals and has been ranked as one of the most highly cited researchers in the category of ecology and the environment. His co-authored book The Boreal Owl:  Ecology, Behavior and Conservation of a Forest Dwelling Predator (Cambridge University Press, 2012) is a comprehensive synthesis of what is known about Boreal Owls.

For decades, Dr. Korpimäki has examined how forestry, agriculture, and climate change affect the population dynamics and conservation of owls. Based upon his research findings, he has established and maintains large networks of owl nest-boxes in western Finland to assist in breeding success. He is active in efforts to conserve Finland’s old-growth forests as nesting areas for owls and other birds of prey.
​
Currently, Dr. Korpimäki is Professor of Animal Ecology in the Department of Biology at the University of Turku, Finland. As an educator, he has supervised 27 Ph.D students and mentored 12 post-doctoral researchers from Finland and around the world. His many professional and public presentations, publications, and interviews have introduced thousands to the intricate relationships between avian predators, their prey, and the environment. 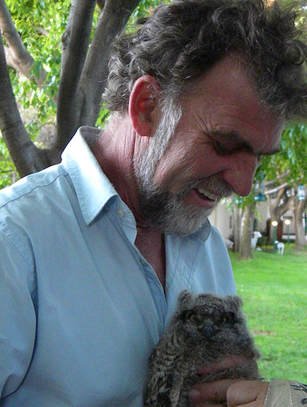 Special Achievement Award: Jonathan Haw, South Africa
In South Africa, Jonathan Haw of EcoSolutions directs the Urban Owl Box Project, an innovative approach to the public health problem of rat infestations in urban and agricultural areas. The project uses native Barn Owls and Spotted Eagle Owls, rather than rat poisons, to control rodent populations.  The Barn Owl is an extremely efficient ratter and healthy owl populations are effective in rodent control. Rat poison, a powerful anticoagulant, can be fatal to humans that ingest it. Owls, domestic animals, and other wildlife often ingest poisoned rats and are likely to die. The project installs and maintains nest boxes to provide breeding support to owls, enabling growth of owl populations. Nesting owls are ringed (banded) whenever possible. The project is the largest of this kind in the world, with more than 3,000 GPS and database coordinated owl boxes.

Because of the negative mythology surrounding owls in South Africa, public education is critical to the success of projects involving owls. Many South Africans view owls as a curse or omen of death and traditional healers may use owl parts in ceremonies. To counter these myths, Mr. Haw created Owlproject.org in 1998. The project is a collaborative effort between Mr. Haw, EcoSolutions, owl rehabilitation facilities, and school systems. The focus is educating children in township schools...“to create owl friendly children, who go on to become owl friendly adults, living within owl friendly environments.” The program installs nest boxes for orphaned Barn Owls on school property. Students participate in classes; name, raise, and release owls, and analyze owl pellets. Owls are ringed before release and autopsied if found dead.

Owlproject.org has dispelled myths about owls and captured the imagination of students and the public. It has expanded to townships across South Africa. Over 100,000 school children have participated in Owlproject.org and approximately 4,000 orphaned Barn Owls have been released.
​
Mr. Haw is a registered wildlife rehabilitator and collaborates with national efforts to assure best practices in owl rehabilitation and conservation. He serves as a resource to the government, public, and business communities. His many television, radio, print, and social media interviews have greatly expanded public awareness of the hazards of rodenticides and the role of owls in rodent control.
In 2003, a chance encounter with nesting Barn Owls in Berkeley, CA, led Lisa Owens Viani to a self-described “obsession” with owls. Since that time she has been an environmental activist; committed to the conservation of owls, hawks, and native predators.

Ms. Owens Viani founded Raptors are the Solution (RATS) in 2011, with the goal of ending the use of rat poison through public education and political action. Early on, she recognized that few people understood the devastating, secondary effects of rat poison on predatory birds and animals that ingest poisoned rats. Owls, hawks, other raptors, foxes, mountain lions, other wild predatory animals, and domestic cats and dogs eat poisoned rats and die from exposure to the anticoagulants in the rat. To increase public awareness of the problem, Ms. Owens Viani has worked with local, regional, and national media to publicize the RATS message and story. RATS shares materials and inspiration with national and international poison-free efforts. She developed the RaptorsaretheSolution.org website that serves as a clearinghouse for practical and scientifically credible information about rats, rodenticides, and rodenticide impacts on wildlife. RATS has published two YouTube videos: Raptor Blues and Got Rats? Let Raptors do their Job! Ms. Owens Viani established the Owl Wise Leader (OWL) awards to recognize businesses, universities, farms, and others that stop using rodenticides.

In collaboration with wildlife photographers, she has created “Faces of Rat Poison” and "Rat Poison is Wildlife Poison" public education campaigns using billboards, buses, trains, and bus/train station signs in the San Francisco, Sacramento, San Luis Obispo, and Los Angeles areas. The billboards/signs combine visually beautiful pictures of wildlife with provocative messages such as “Rat poison kills more than rats.”; “In one year, I will eat 1000 rodents. Please don’t poison my dinner.”; and “Rat poison is wildlife poison.” Over the past 5 years, millions of people have been exposed to these messages in English and Spanish.The posters and messages have been translated into many other languages as well and spread through social media.
​
Ms. Owens Viani collaborates with researchers studying the effect of rodenticides on owls and other wildlife. She is known as a coalition builder in the anti-rodenticide movement and has worked with 28 California cities to pass anti-rodenticide regulations. RATS advocacy has led to bans on rodenticides in California state parks and wildlife areas; broader state and national rodenticide bans are the focus of her continuing work.