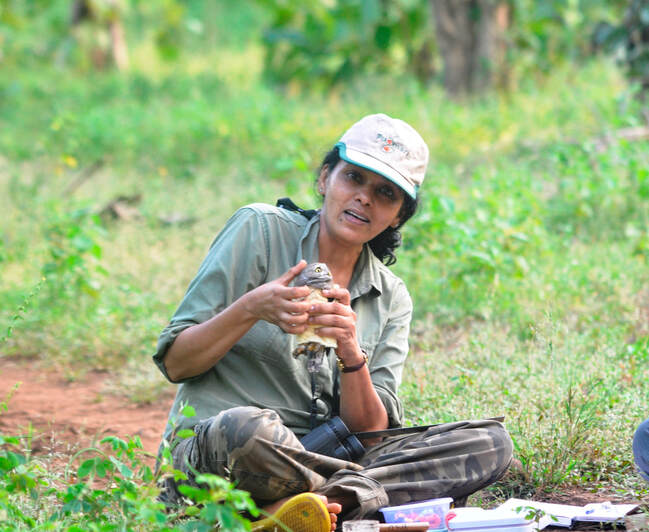 If you want to know anything about Forest Owlets, Dr. Prachi Mehta is the person to ask. The Forest Owlet is an endangered, endemic species in India, and until 1997 was thought to be extinct. Dr. Mehta has dedicated much of her work to helping these extraordinary little owls.

From an early age, Dr. Mehta was interested in wildlife; participating in nature camps, hiking and learning as much as she could about wildlife ecology. While working on her Ph.D. she met Jayant Kulkarni, an Indian Forest Officer, and once she graduated, they co-founded the Wildlife Research and Conservation Society (WRCS) to work on wildlife and conservation projects close to their hearts. Through the WRCS, Dr. Mehta has studied forest birds, Indian giant squirrels, elephants, and tigers, among others.

Dr. Mehta is perhaps most well-known for her long-term research on the Forest Owlet. She and her team carried out an extensive survey across five states in India, searching for the Forest Owlet, and discovered two new populations in managed forests. In 2013, Dr. Mehta initiated an in-depth study of the Forest Owlet in Madhya Pradesh, looking at ecology, demography and population, and was the first study in India to use mark-recapture techniques and radio tags to monitor this species.

Starting in 2017, partnering with the Melghat Tiger Reserve in Maharashtra, Dr. Mehta has been working on another project to study interactions between the Forest Owlet and seven other owl species. This study examines resource allocation between the species and how it affects habitat use, diet, breeding behavior and nesting success of all the owls.

Research is not the only thing on Dr. Mehta’s mind; she is dedicated to education as well. Over the years, she has trained 25 graduate and post-graduate students in owl research methodology, and six students carried out their Master’s theses on owls under her guidance. Dr. Mehta has given public and private talks, written several peer-reviewed publications, and published a technical manual called “All About Owl Diet.” This photographic guide shows keys to identify prey remains in owl pellets, and is the first publication of its kind in India. Dr. Mehta has also worked closely with the Forest Department, and her work has led to several areas of owl-occupied forest becoming protected from logging.

To bring home the importance of owl conservation, Dr. Mehta has also involved local communities. She is works closely with the tribal communities living near known Forest Owlet habitat, teaching them how to make owl-themed handicrafts to supplement their income and provide an alternative to illegally cutting down trees. Dr. Mehta has also started a program called “School of Owls,” where she prepares booklets about owl awareness, has them translated to local languages, and distributes them to local communities and field staff.

Dr. Mehta is looking forward to continuing her research and conservation efforts on the Forest Owlet and other owls, getting researchers and policy makers interested in owls, and making India a better place for owls overall. 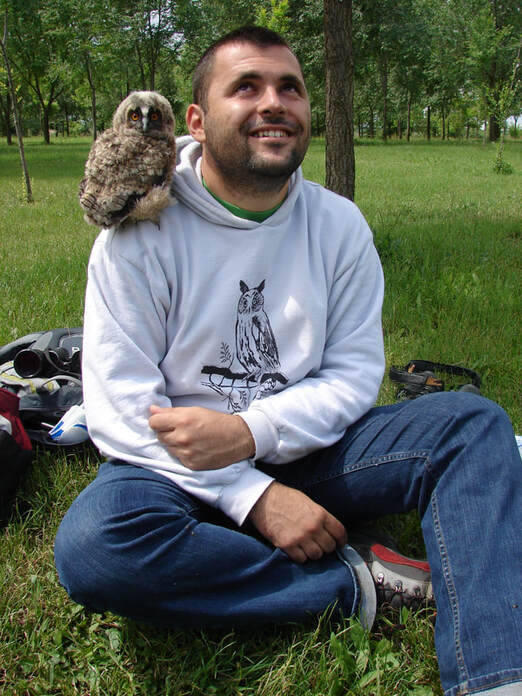 If you’ve heard about the world’s largest urban wintering site of Long-eared Owls (500-700 owls in one city square!), you know of Milan Ružić’s work. Ružić was given a special prize by the City Council of Kikinda—the location of the wintering site—for the promotion of Kikinda as the Owl Capital of the World. He has been working with owls for more than 20 years doing education, rehabilitation and research on owls in Serbia, and this has earned him a Special Achievement Award from the World Owl Hall of Fame.

Ružić is active at the Serbian Owl Conservation Centre and is currently the CEO of the Bird Protection and Study Society of Serbia (BPSSS). The BPSSS is the largest nature and bird conservation NGO (non-profit organization) in Serbia, and they connect citizens to wildlife rehab centers. Each year they help facilitate the rehabilitation of at least 150 Long-eared Owls, 90 Little Owls, Barn Owls and Scops Owls, and occasionally other species such as Eagle Owls, Tawny Owls, Ural Owls and Short-eared Owls.

Rehabilitation alone does not qualify someone for the Hall of Fame, and it’s far from Ružić’s only involvement with owls. He and his team also run research and conservation programs for all 10 owl species that breed in Serbia, including placing nest boxes for most of these species across the country. Ružić is especially successful in attracting young conservationists, bringing in 250 volunteers to survey Long-eared Owl roosts between 2006 and 2010. All residential owl species, along with other bird species, are included in the Red List of Birds of Serbia, which was largely done by Ružić and his team and has set standards for legislative owl protection on a national and international level.

A key requirement of winning a World Owl Hall of Fame award is sharing information and educating the public. In addition to rehabilitation and conservation, Ružić has also done a lot for owl education in Serbia and around the world. He has given more than 30 talks about Long-eared Owls and other Serbian owls, including at the International Ornithological Tourism Fair in Spain and the Owl Conservation Conference in Poland. He has also given presentations as part of the International Owl Center’s Owl Expert Speaker Series. Serbian national TV broadcasted a documentary series called “Urban Birds” featuring 5 owl species and was presented by Ružić and his team. This TV show was viewed by an average of 1.5 million people in Serbia, plus many more in the Western Balkans. Perhaps the most important video about Ružić and the Long-eared Owl roosting phenomenon in Serbia was a 2-minute segment included in the Planet Earth II series on the BBC.

Milan Ružić is still young, so we expect to see more from him in the owl world in the future.