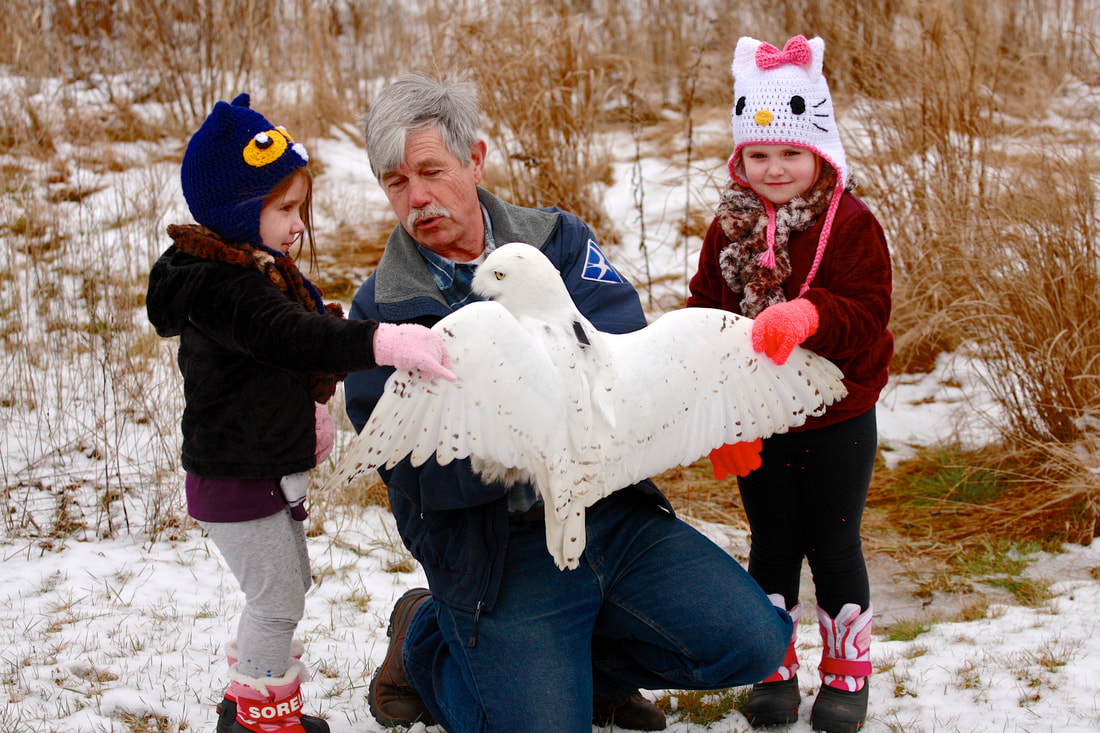 Smith is best known for his work trapping and relocating Snowy Owls from Logan Airport in Boston, Massachusetts (since birds and airplanes don’t go well together). To date he has relocated more than 850 owls, analyzed more than 5,000 pellets, and was the first researcher to attach a satellite transmitter to a Snowy Owl captured on the wintering grounds and then track it back to the breeding grounds in the arctic. At some airports snowy owls were being shot for the safety of the planes so in 2013 Smith and Jeff Turner, a wildlife biologist for the USDA, wrote and implemented protocols for trapping instead of shooting them that were adopted by the U.S Department of Agriculture at airports across the USA and Canada.

His work with owls started more than 50 years ago with banding and rehabilitation. Thirty-five years ago, he discovered that he could foster young owls into wild nests instead of hand rearing them with a higher rate of survival and since then has put over 1,000 orphaned young owls into foster nests. Through banding rehabilitated owls, he found that some one-eyed owls could survive in the wild, with one living 10 years after it was released. To date he has rehabilitated more than 2,000 owls.

As natural educator and passionate speaker, Smith has served as a keynote speaker at prominent birding events around the USA. He recently retired as the Director of Mass Audubon’s Blue Hills Trailside Museum and the Norman Smith Environmental Education Center where millions of people were educated during his tenure.

Smith is also a collaborator. He was a founding member of the International Snowy Owl Working Group and hosted their first meeting in the USA in 2017. As a result of this group’s work at that meeting, the Snowy Owl was reclassified from Least Concern to Vulnerable. In the winter of 2013-14 he was also one of the co-founders of Project SNOWstorm, a network of researchers tracking Snowy Owls with satellite transmitters. He is a co-author of the authoritative Birds of North America account on Snowy Owls and also helped raise funds to purchase a snowmobile for a Snowy Owl researcher in Russia.

The media helped Smith educate even more people by promoting his work. He has been featured on the front page of the New York Times, NOVA, CBS News and World Report, Ranger Rick, National Geographic for Kids, Cornell’s Living Bird, and hundreds of other news articles.

His mission is to use the information gathered from his research to stimulate a passion in everyone he meets to help us better understand, appreciate and care for this world in which we live. 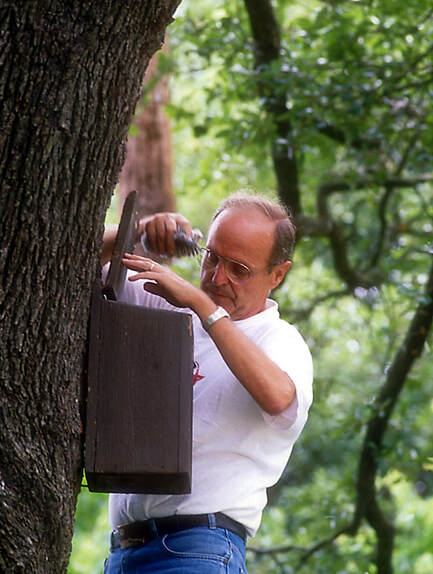 These comprehensive and important publications have arisen out of his half-century-plus of research on owls, including his extensive work with Eastern Screech-Owls in the suburban Woodway area of Waco, Texas as well as the surrounding urban and rural areas since the mid-1960s. During this study he found that urban owls had better survival rates than rural owls and that owls were nesting earlier and earlier, likely as a result of climate change.

Dr. Gehlbach and his wife Nancy conducted multiple studies on small owls living in Cave Creek Canyon and the Huachuca Mountains in Arizona that included Whiskered Screech-, Elf, Northern Pygmy-, Flammulated, Western Screech- and Northern Saw-whet Owls. They found they small owls nest in clusters of mixed or single species, that they are nesting earlier than they used to, and that El Nino-Southern Oscillation cycles control life in these mixed riparian forests.

World Owl Hall of Fame awards are about making the world a better place for owls, so simply conducting research, even over very long periods of time, is not enough to earn an award. After Dr. Gehlbach moved to live closer to his Woodway screech-owl study area he championed his homeowner’s association to create a 15-acre wildlife preserve along the protected ravine in which the owls lived. He also wrote a column for the Waco Herald-Tribune for five years to teach area residents about the nature surrounding them, including the screech-owls. Dr. Gehlbach is well acquainted with mammals, birds, reptiles, amphibians and fish as well as plants and geology.

As a professor at Baylor University, Dr. Gehlbach influenced and included many students in his research. Dr. Cherie McCollough conducted her Master’s research on Eastern Screech-Owls under Dr. Gehlbach and will be traveling to Houston, MN to receive the award on behalf of Dr. Gehlbach. Karen Becker, Executive Assistant to the co-founder of the International Crane Foundation, was an assistant to the Gehlbachs during their 12-year study of owls in the Chiricahua Mountains and will also be present for the award presentation. 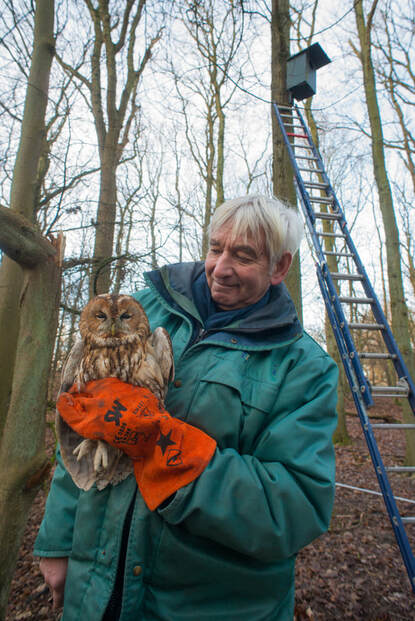 Mr. Koning began surveying raptors in the Amsterdamse Waterleidingduinen (AWD) area in 1957. The AWD is an 8,400 acre (3,400 hectare) natural coastal dune area where the drinking water for Amsterdam originates. Mr. Koning tracks all raptor nests in this area including Tawny Owls, Little Owls, Long-eared Owls, Eurasian Sparrowhawks, Northern Goshawks, Common Buzzards, European Honey-buzzards, and Eurasian Hobbies. Young are banded when possible, and pellets are analyzed to identify the prey the birds are eating. Tawny Owls are banded in the fall and winter to determine their relationships and body condition.

Because this is such a long-running study, Mr. Koning’s son, Henk-Jan Koning, has joined the study.

The longevity and thoroughness of this volunteer study has allowed significant insights into how humans and our decisions affect raptors. Over the 60+ years of the study Mr. Koning has witnessed and documented the changes that resulted from grazing, forest protection, banning pesticides, and ending hunting.

For instance when the study began game keepers sometimes shot owls and falcons on their nests, killing the birds and destroying their nests. This resulted in a lack of nest sites for owls, who don’t build their own nests. Mr. Koning built artificial nests and enlisted others to do the same. Overgrazing by cattle and deer resulted in a loss of 70% of the breeding birds in some areas. Because of their research the overgrazing was stopped and there is a promised reduction in the size of the deer herd. To eradicate invasive black cherry trees the forest undergrowth was tilled, eliminating nearly all habitat for voles and mice, so the owls disappeared. This practice has now been stopped.

A key requirement of winning a World Owl Hall of Fame award is sharing information and educating the public. Mr. Koning gives lectures each year to local and national organizations, has presented his research at two world owl conferences, publishes articles in local and international nature magazines, appeared on two Dutch television shows, and co-authored a book on Tawny Owls: Uilen in de duinen. 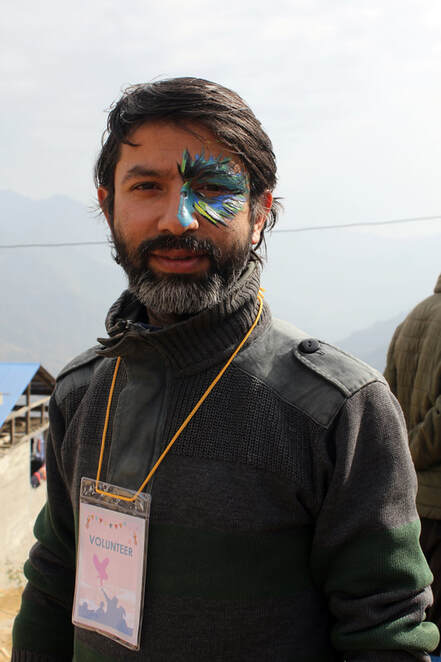 Mr. Ghimirey conducted the first owl conservation camp in Nepal in 2008 and has been involved in one way or another in the 600+ camps that have taken place since then. The camps have reached over 18,000 students and more than 26,000 members of the general public to date. He has helped with surveys to assess the impact of hunting and trade in owls and has co-authored two Nepali books about owls: Owls: dumb or clever and Owls of Nepal.

Since reaching the public is critical, Mr. Ghimirey came up with the idea for a radio program called “Voice of Owls” and has talked about owls on both radio and television. He serves as an editor of Haapsilo, a Nepali newsletter on owls geared to students and the general public. He also plays an integral role in the Nepal Owl Festival, a sister festival to the International Festival of Owls in Houston, Minnesota.

On the scientific side, Mr. Ghimirey assisted in the establishment of 14 permanent owl monitoring points in the Himalayas and encourages and supervises graduate students studying owls. He served on the team that helped nine species of owls gain “threatened” status in Nepal and is a team member of the National Owl Conservation Action Plan.